Menu
Politics is about persuading voters about priorities.
To do so, facts are important, but they can also be misused in an attempt to win the debate.
Here the facts fight back. This site presents the facts to help keep the debate clean and to persuade politicians and others to stick to the facts.
Home   /   Does negative gearing keep rent prices low? > Check the facts

Treasurer Joe Hockey recently defended the practice of negative gearing investment properties. “If you change negative gearing then there are significant flow-on consequences from people that rent homes and that needs to be properly considered,” he said. “There is a very strong argument that if you were to abolish negative gearing, you would see a significant increase in rents.”

Economies are complex organisms, with many moving parts, so you need to be careful before attributing change in one variable to change in another. To show one effect was the result of one cause, you need to control for potential omitted variables, or other influences that could have been the real reason. (For example, far fewer people die in the front of ambulances than in the back of them, but the policy solution is not to simply put injured passengers in the driver’s seat).

Anecdotally, Australia’s memory of reform to negative gearing is coloured by the experiences of many in the mid-1980s, when the Hawke Government acknowledged negative gearing was driving up property prices and put a national quarantine in place. The results of this decision are typically cited as the reason why the system is working as intended, and cannot be amended without sizeable and costly adjustments.

Negative gearing is a national policy that should, if working, have influence nationally. If all local rental markets are uniform and identical in terms of demand and supply, national changes should have uniform, national effects.

But between 1985 and 1987, the period Mr. Hockey cites, we did not experience uniform effects. Rents grew quickly in Sydney and Perth, yes, but rents in Melbourne actually fell.

This evidence should be cause to re-examine why things occurred as they did. The power of negative gearing to explain why rents rose in Sydney and Perth and not in the rest of the country is weak to non-existent. Thankfully, we have plenty of better explanations.

In contrast, if there are many would-be tenants competing for a small, insufficient stock of rental properties, then they will bid against each other and raise the market-clearing price of rent in that city. In places where there are not enough rental properties to meet demand, there is the greatest incentive to negatively gear an investment property. This means;

For cities with lower than average rental vacancy rates, we should see the highest gains in rental prices after quarantining negative gearing.

For cities with rental vacancy rates above or matching their average rates, we should see no effect from quarantining negative gearing. 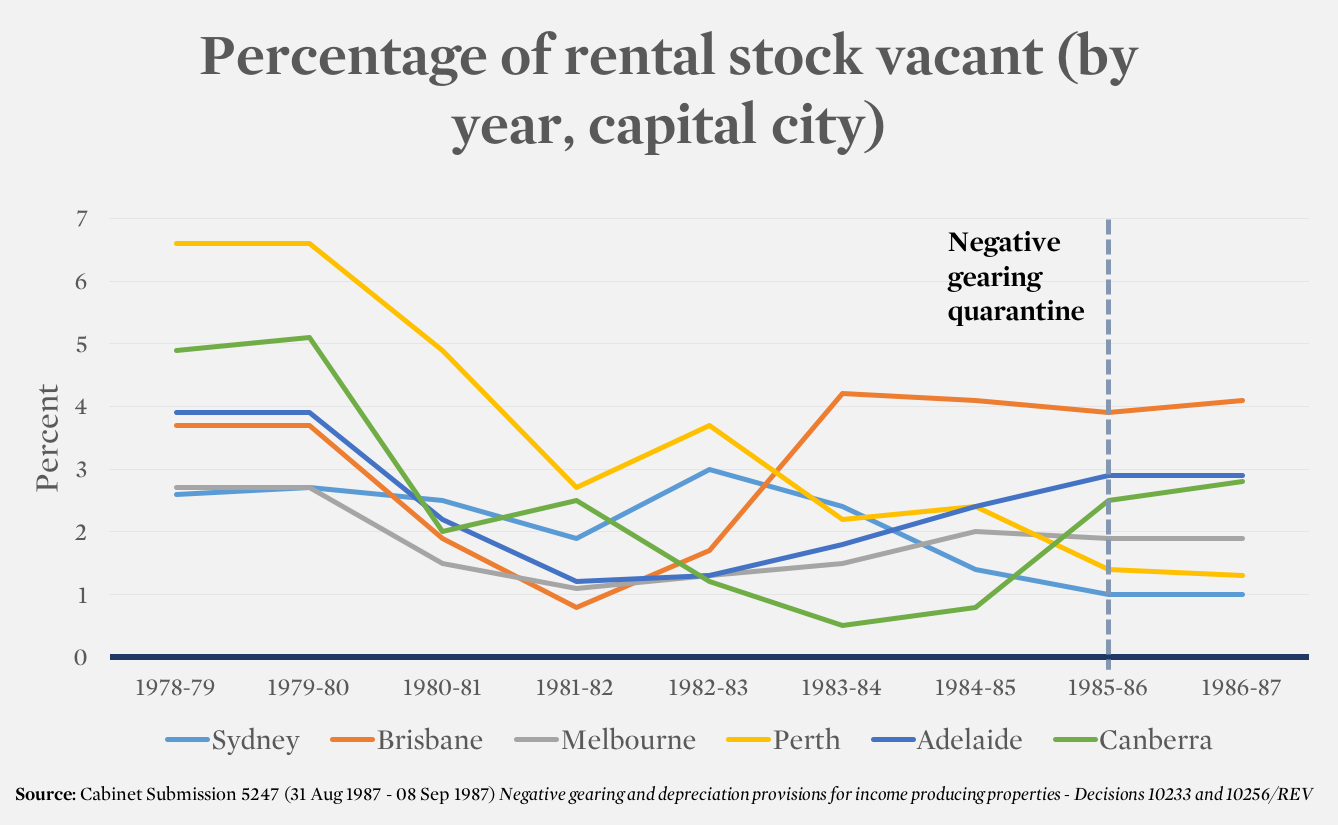 It is for this reason that the Hawke Government’s 1987 cabinet papers attribute the rent increases following the negative gearing quarantine in Sydney and Perth to “local influences rather than tax measures dominate in metropolitan rental markets”.

The table below summarises the results:

Today, little has changed to require us to reevaluate the merits of this costly and inefficient program. In June 2013, only 5 per cent of investment in housing was dedicated to constructing new dwellings. Vacancy rates are historically low. What did not work in 1985 is not working in 2015.